A trawl of my archives early in 2011 uncovered a stash of programming previously thought lost to history. This cache of code included several games that my brother created in the mid-1990s. He had remarked about one of them, some kind of isometric 3d game involving a bouncing ball. Well, the hoard did include this game, a screenshot of which is included below.

I passed the material over to him, so he could have a 'look'. I played the 'Crystals' game on VirtualAcorn. Running in old school 16 colour display resolution, it proved to be too fast to play, so a timing loop was added. I have to say it holds up pretty well. The game is incomplete (there are only 3 levels, and the data for each level is very complex, requring positioning code for not only the objects, but the paths the monsters follow), and has no presentation whatsoever. But it is fun to play :-)

My brother had been rifling through the code in March 2011, and converted the game sprites to a higher resolution mode - it all looked rather crisp. Check out the images:

As for this last shot, not sure what happened here, but it does look a bit 'early 90s amiga demo?'

During August 2013, my brother obtained a Raspberry Pi. He's been running RISC OS on it, and he has created an editor program to help him put together the missing levels. One day... maybe I'll see something.

Something for Christmas (or anywhere you want snow) - The BASIC Snowman

I uncovered this nice little piece of BASIC V goodness by my brother, from 1997. It draws a smiley snowman on the grass, before some lovely snowfall. You can change the amount of snow that falls by using the Z and X keys, from a few flakes, to a blizzard. Press the Enter key to return to the desktop.

Since it's written in BASIC V, it will run on any RISC OS variant, including (hopefully) the Pi. I say hopefully, because it doesn't appear to use screenbanking, which is an issue on the current distro. I've done a little code cleanup to make it easy to follow. It does use mode 32, so it may appear funny on newer monitors. Just download the zip and unpack the single file to your desktop.

2 player sword-fighting action, for practically any RISC OS computer. Go to my special page for more details. The game should work on anything from old machines to RISC OS Pi.

The software also includes a fairly rudimentary level editor, so you can design your own arenas to annoy your mates with.

General merriment all round really!

This was written by my brother in mid-1996. It's an overhead game for up to 4 players, where you must move your tank over the terrain, and destroy your opponents. You can adjust the amount of terrain and obstacles to make the game easier or harder.

I've adjusted the game so that it could in theory, run on older editions of RISC OS. It is written in Basic V however, and uses a high resolution screen mode, which exists in version 3.50 of RISC OS or greater. I can't vouch for whether it works on systems such as Risc OS Pi, but it uses old sound modules, so my guess is that it requires Aemulor to run it.

A replacement manual for this flight simulator originally from 4th Dimension. You can download it from here:

Copyfit was written during my art college days, when I did a subject called print theory. And very boring it was too. One of the things we learned was how to work out the number of words on a given page, depending on various things such as leading, type size, measure and page depth.

This program does all the calculating for you. It's a bit pointless, what with these tools called DTP packages to do the stuff for you in a much friendlier way. Yet in the good old days of printing, working this stuff out was vital in order to work out how much paper a book would use according to type size.

Cache is an ARM cache toggler, written for ARM3 users, such as the older Archimedes models and A3000 computers. I was working on a StrongArm version with another programmer, but we lost contact.

The program sits on the icon bar. Click on it, and a cross or tick will appear over the chip icon, to determine whether the cache is on or off. Very handy before running games, but there is no hotkey option for toggling it outside of the desktop. It's a very messy program, and one of my early attempts at RISC OS Wimp programming.

The games presented here are available in two forms:

The booklets are still of interest, because they feature developer diaries and novellas, and for anyone interested in BBC BASIC, they serve to demonstrate one approach to programming these kinds of games.

I hope that everything here works properly. If you have any problems, don't hesitate to get in touch.

v1.01 was released in November 2021, and the link to the revised game is below. The following issues were addressed:

Between August 2020 and August 2021, I blew the dust off the Androidz game, and managed to remaster it with bugfixes, extra colours, and a few revised levels. It took a lot longer than anticipated to complete this project, but I had some considerable help from members of the Stardot community, in particular, 0xCODE, in bringing this to fruition. 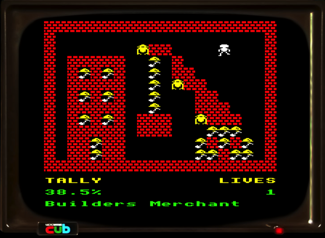 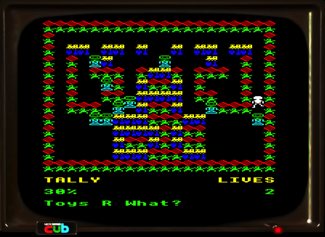 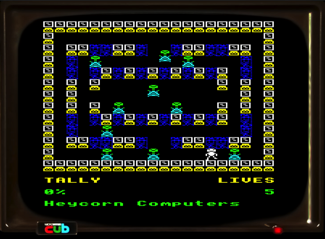 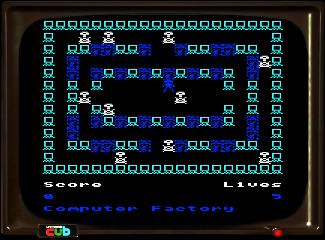 Androidz was my first 'proper' piece of programming. Consisting of 20 levels, you must destroy all the robots in each 'factory' before proceeding to the next. The game was published in the June 1994 issue of Acorn Computing magazine, a last gasp attempt to inject some life into the Acorn magazine market. The magazine closed in March 1995. 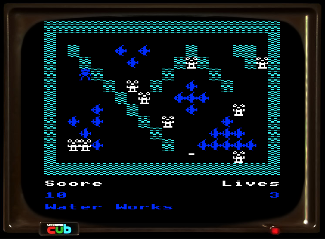 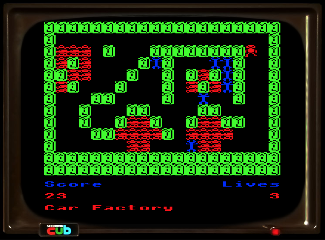 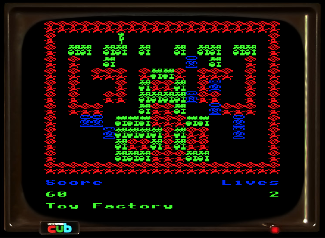 It's a very basic piece of programming, and some bullets go straight through the robots if both bullet and robot move towards each other at the same time. I guess it's down to how I coded it at the time. The above screenshots show that each level is rendered in three colours on a black background (Mode 5), which is quite restrictive when using single coloured characters.

This game was bug-fixed in October 2021, and the link to the revised game is below. The following issues were addressed: 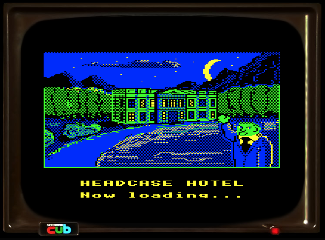 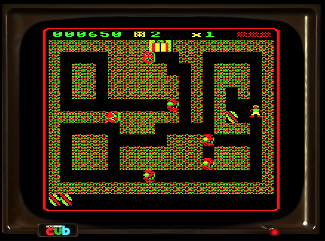 This game was started in 1992, based on an idea by my friend Christopher West, and ended up being finished three years later, for my end of year show at college. It's a similar game to Androidz, but features multi-coloured characters, at the expense of fewer levels.

Dave Edwards, who runs the Acorn Electron World site very kindly managed to produce a disc image which includes the title screen. I remember using some art package which came on an edition of the subscription-based Fast Access disc magazine - Megadraw I think it was called. Dave also reviewed both this and Androidz on his site. As if that were not enough, in February 2012, Headcase Hotel was featured in one of his Five Games Five Minutes quickfire reviews on his Youtube channel. 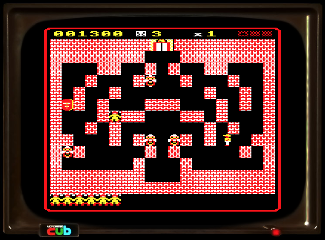 A front end web developer based near Godalming, Surrey, United Kingdom, I've worked with a diverse number of clients within the UK and Malaysia. This site showcases some of my work.

Thank you for visiting - Come back again soon.